Cape Sounion, an advanced sentinel of Attica 50 km from Athens, occupies an admirable marine site facing the Aegean Sea and the Cyclades. This cape, 60 meters high, which plunges steeply into the sea was called, by the Ancients, the “sacred point”. The temple of poseidon, standing majestically on this promontory, was dedicated to Poseidon.
Built of marble between 444 and 440 B.C. and then ruined by the weather, it has been partially restored. Its slender columns are about 6 meters high, which is not exceptional, but the fact that they are thinner at the top than at the bottom contributes to give them this impression of grandeur. 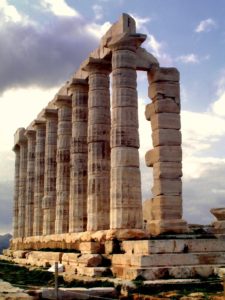 In order to appreciate all its magic, we must put Cape Sounion back in its time.
From the rock overlooking the bay, the Athenians used to watch over the Aegean Sea and could spot any suspicious fleet sailing towards Athens, long before they could reach it.
That is why, quite naturally, they built a the temple of poseidon there dedicated to Poseidon, God of the Sea.

Athens, having been defeated by Crete, was obliged to send seven young men and seven young women to graze regularly on the Minotaur.
The Minotaur, a monster with the head of a bull and a human body, was kept locked up by King Minos in a labyrinthine maze designed and built by Daedalus, a famous Athenian inventor and architect.
This labyrinth was constructed in such a way that no one could escape from it or from the man-eating monster.
Theseus, son of Aegaeus, king of Athens, sympathizing with the pain of parents whose children might be drawn by lot, decided one day to go and kill the Minotaur. To do so, he slipped into the group of young men that Greece was to sacrifice to the monster and arrived in Crete.

Minotaur and the temple of poseidon

As soon as Ariadne (daughter of King Minos and half-sister of the Minotaur) saw him, she fell in love with him and offered to help him. In exchange, she made him promise that he would take her to Athens and marry her.
She then gave him a ball of yarn that she had received from Daedalus.
Theseus, tying one end of the thread to the door, unraveled it as it advanced. Having killed the monster in the Labyrinth, he was able to find his way back and leave unharmed.
In a rage over his escape, Minos locked Daedalus and his son Icarus in the labyrinth. The prisoners could not find the way out, but Daedalus made wax wings so that they could both fly away. Icarus, coming too close to the sun, saw his wings melt and drowned in the sea, while Daedalus managed to reach Sicily.
Icarus

Aegeus, for his part, was waiting for his son at Cape Sounion. Indeed, Theseus had agreed with his father that if he emerged victorious from this terrible battle, he would hoist white sails on his boat. But if he was killed, the crew would have to leave the ship with its black sails.
Aegeus saw the ship with large black sails coming in the distance. Theseus forgot to hoist the white sails. In despair, Aegeus, believing his son dead, threw himself from the rocks into the sea, which since then has been called the Aegean Sea…